Opinion About Friday the 13th Vs Dead by Daylight

Re: Opinion About Friday the 13th Vs Dead by Daylight

SlasherxKing wrote:I've been playing DBD on my PS5 lately and im enjoying it for what it is. I got back into playing it regularly again because of my favourite horror game franchise getting a chapter (Resident Evil) and been enjoying playing as Jill and Nemesis.

I main Pyramid Head and Demogorgon too. I used to want Jason in DBD, but i dont know anymore... what would his power even be?

Jason wouldn't be truly unique and different from the like The Trapper? The Huntress? The Spirit? even the Trickster?...

His powers would be GREATLY nerfed...

Plus what version would they even use? His speed would be nerfed given by the films.

The only version logical for DBD is Part 2-4 and the Reboot it would suck using Part 5/Part 6-FvJ because he wouldn't move fast and just be power walking.

Their modeling for licensed characters is 50/50 I mean look at Michael...he doesn't even look like The Shape from 1978 at all!

His power and add-ons would be so confusing because....

Jason would need the Passive of brute strength, breaking the doors off of hiding places, and increasing the degression of the generators.

Perks? His perks would be basically useless you could turn the trapper into an offbrand Jason with: Iron Grasp and Insidious...unless a perk gives him one shot.

like he is so useless if he comes into the game...just make a Jason skin for the trapper.

Exactly my thoughts. Same issue for me personally when the Demogorgon came out, it was basically what i had thought of a werewolf killer (huge werewolf fan). I still want a werewolf though, i don't care if Jason joins DBD, but if he ever does, i hope he won't be completely terrible...

Im fine if they just give the Trapper a Jason cosmetic and not an overall Jason release.

A werewolve would def fit but its gonna have to be SUPER fast.

This just makes me glad that the Camp Blood mod is a thing coming out. Definitely worth getting back on my PC for... unlike DBD 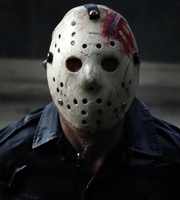 Re: Opinion About Friday the 13th Vs Dead by Daylight

SlasherxKing wrote:This just makes me glad that the Camp Blood mod is a thing coming out. Definitely worth getting back on my PC for... unlike DBD

Oooh I agree! I bought it on PC 3 or 4 months after the release date but barely played due to Hackers.