Why Jason Voorhees Wouldn't Fit In Dead by Daylight

Why Jason Voorhees Wouldn't Fit In Dead by Daylight 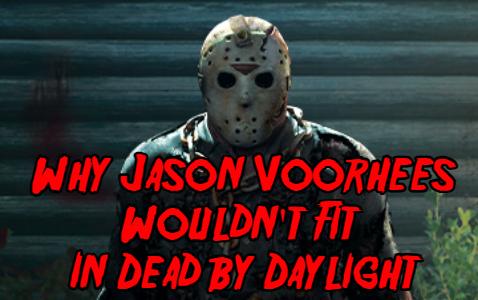 All of this is ofcourse My OPINION and is by all purposes its not OPINIONATED! so just to give terms/definitions before people get upset and come at me....

Opinion (Definition) wrote:a view or judgment formed about something, not necessarily based on fact or knowledge.

I WILL state that I am basing it mostly on Canon/Logical purposes to help validate my reasonings listed here so enjoy the read.

The lore would have to HEAVILY be based on the Living Version of Jason and not the "Undead" so sorry to Kane Hodder and C.J. Graham's versions of the Character.

Original: Part 2-4 Jason is alive, can run, and has more motivation than just avenging his mother and living in the area for the sole purpose of having the Camp Grounds shutdown.

Reboot: Derek Mears like above is nearly the same but instead, he is protecting his territory.

So the lure wouldn't be bad.....it would be the most known generic one we know but love.

Alright time to get into HOW the entity could/would get Jason Voorhees himself into his "Realm" and there are about 3 ways....and I'll explain to all of them.

These are all motives for Jason to join in with the Entity....to explain these are all what Jason personally desires and is logical into baiting.

Jason being undead and having "something" trying to control him wouldn't be logical.

Power Base on Strength: Imagine a "Non-Running" version of the Oni...this would be Jason....his power would be like Michael in Tier 3...but worse because now you got a Linear attack only with no pressuring against Multiple Survivors....but strength-wise it would have to be Jason completely breaking the lockers to hinder the survivors but again won't happen because that's breaking balance.

Power Base on Teleportation: This power is UTTERLY useless.....this isn't like the F13: the Game whatsoever and in DbD teleportation is what Freddy does....what would Jason teleport to in this game that isn't a misty rip-off of Freddy's? teleport into lockers?.....teleport through a mist with the limited time that it hinders mobility like the Nurse? it's too unoriginal...

Power Base on Stalking: This power is basically what Michael has....he has to stalk up on his prey to increase his power? VERY un-Jason like of him because I'm sure no one wants another Ghostface/The Shape based power making it "Generic" and unoriginal.

Power Base on Trapping: This power if going the reboot would be useful.....we already got "The Trapper" for the game, and using the OG Jason wouldn't work because he didn't use bear-traps or snars against his victims.

Power Base on Stealth: This power is basically The Wraith's power which is mostly based on Cloak and we don't need Jason with some fake pseudo-insidious this would break the game overall balance even more.

What logical power would Jason even have? He isn't a Ghost, Mutant, Vampire and etc which he would have to be Human or Undead, and using Undead would have too MANY disadvantages against surviors.

His power would have to be with something from the films...it would have to be something mostly shown by Jason..."Sudden Appearance"?? Nah too "The Spirit" concepts....as you can tell it's hard for even me to figure out what kinda power Jason would have within their Universe because its all been mostly done....its as pointless as having The Hillbilly and Leatherface itself.....a copycat and the original? come on!

This is obvious....Jason wouldn't need or have any "Hexes" Jason didn't use magic, didn't know magic, and didn't know anything about the dark arts so the Perks would have to be with movement speed,anti-gen progression, and knowing where the Survivors are....the problem is survivor mainers would be complaining about these because the Devs of DbD would have to either have Jason as a Walker or a Sprinter...he would be basically Michael 2.0 or The Huntress 2.0.

Jason was busting through doors, was running, and was finding his victims no matter where....so where/how could you turn that into perks when it should be the "base" power logic?....you can't it would be heavily disrespectful for the characters entire persona to just nerf and make him look like a chump.

Simple and basic references from the films but again it has to either work with his Power/Perks to make him even a challenge for Players something to add both pressuring to where Survivors don't take 5 mins to end the game with servers.

Obviously, it's going to be the Camp Crystal Lake grounds as his "Realm" but with more closed quarters than most maps because it would have to be completely cabin-based with HEAVY Pallets to used against him.

Here we have two good survivors....but only one being logical for it.

Tommy Jarvis: The one who killed Jason, and then almost kept him at the bottom of the lake itself, Tommy is logical because he is human and has no supernatural powers, and has the most known films from Part 4-6 of the franchise.

Gameplay wise the game doesn't fit Jason whatsoever....Jason wouldn't hook to feed an unknown force...Jason wouldn't hook and allow others to get a save, Jason is a BRUTAL and I mean BRUTAL killer...Michael would fit because in the original 1978 Halloween film, Michael was clean,cunning, and silent but Jason was gruesome, cunning, and silent which is two different aspects of what it is for a video game.

Jason is SIMPLY and LOGICALLY not fit nor properly meant for the Game mechanics given and hence why Friday the 13th: The Game itself by all means factually gives us a proper and accurate game for the character.

It simply put that Jason is just wrong for the game...its very much arguable that the other licensed killers other than Leatherface aren't fit for the Game this being Freddy, Michael, Ghostface, and Pyramid Head don't simply Hook people they go for the kill they enjoy it and logically only 2/4 of these beings would be lured by the Entity while the rest won't.

If DbD would want a "Living Jason" from Part 2-4....he would have to be VERY mobile (Yes Jason can sprint and run) and he would have to play like Huntress with sprint or have to play like Hag in Speed, but if they want "Undead Jason" from Part 6-FvJ he would be as Slow as Base Michael and need Bloodlust to even Gain Speed against Counselors, they try to add ANY of the listed powers...it's just ripping off the other killers which would ruin both the originality and the overall work put into them individually.

The devs would have to make an incredibly Inconsistent character...would have to give him new mechanics and gotta make sure he is EXTREMELY nerfed for survivors to have any survival chance this is why I'll state again that Jason fits perfectly in Gunmedia/Illfonics original video game because the mechanics and gameplay matches Jason in his brutality form.