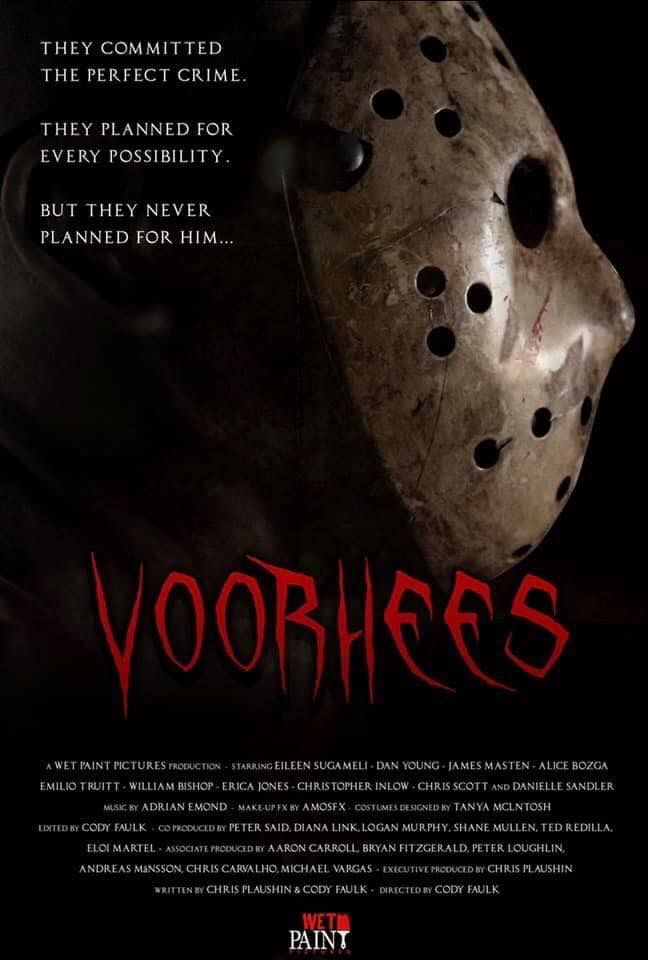 This review is NOT about pure hate, overall fanboying, or biased views but A PERSONAL and HONEST perception of the fan film Voorhees! The rating system based on this review is based on a scale of 5 stars each point will be given an official rating, and to remind this is my opinion! I AM NOT NO ROTTEN TOMATOES CRITIC I AM A FAN OF THE SERIES!

NOTICE! THIS REVIEW HAS SPOILERS SO READ AT YOUR OWN RISK!!!

After pulling off the perfect heist a dangerous crew of thieves flees town to the seclusion of the nearby woods. All they have to do is make it through the night so they can get away clean but their sadistic leader has taken them to the long-deserted Camp Crystal Lake, a place that is no longer on any maps and for good reason. Unaware of the locations notorious past the fugitives begin to explore their temporary hideout and soon realize that this place has a very dark and violent history that they are soon about to become part of. It is a race to the morning where the lines between bad and pure evil are blurred and the fight to survive the awakened legend of Camp Crystal Lake is much more than they bargained for.

As many knew from their summaries/trailer we assume it's a basic "heist" gone wrong but as we watched the film it was something more than just that, corrupted crystal lake officials, from a boyfriend, kidnapping his girlfriend, this plotline was never introduced in many fanfic communities that I know of where Jason kills bank robbers this was something original and isn't fully derived from any of the previous Friday the 13th films that involved Jason himself, as we know Jason isn't some Superhero or Villian, and he surely doesn't work for the law or anyone else but him and mother Pamela!

This was a whole new and Original storyline which is something worth watching so I rated this a 5 out of 5 Stars!

We are seeing from what I can understand some new actors, who by my observation did a really good job, In some moments and scenes you would be expecting more "emotion" about specific situations, actions, and dialogue but overall it wasn't bad or cringy.

The stunt work was also well done, the actors behind these stunts looked amazing, no real stiffness in their movements, and their death scenes were perfect for a slasher film.

The combat between actors was also worth mentioning as the Jason vs Robber with the ax hit and the throwing of the fire
My Official Rating:

I would be rating the acting is 3 out of 5 stars! It's because to me it didn't make me feel uncomfortable or awkward to watch them try to act, even if they are new or not they did an amazing job for this fan film! but could have done better in certain scenes for the film.

Them being overall authentic with their acting makes it worth the time used for character development.

I was seeing the practical effects used in the film and I could give a lot of praise for this because using CGI in a Friday the 13th film is by many in the horror community would be a sin, and I have to congratulate the team behind using actual make-up and using the camera to give us some realistic hits and damage to the victims.

My only critique is the "Blood" it looked too unrealistic in my opinion but overall it didn't ruin the feel or the motive behind what was shown, the gore was fantastic to see, and the motion and overall detail to the deaths were symbolic of what a Killer Jason is.
My Official Rating:

I would give the special effects a 4 out 5 stars because with others I am a lover of practical effects! and seeing Jason (Jordan Blancos) just brutalize the victims with no use of CGI or just cutting to black, it shows what a team of Friday the 13th fans can do which the MPAA wouldn't allow for us Slasher fans!

Jordan Blanco was a really interesting Jason to see onscreen, as many know I am not a fan of a "Hoody" type kind of Jason, this design of Jason isn't based on any of the original Jason's we know and love, and its nothing like anything based on someone else's, the simplicial part of the clothing was nice, it was original, and it looks to be a homage to the look of Derek Mears 2009 Jason, Mask and all, but overall it's not a bad Jason "design" wise.

As for the face...the face looks fantastic! it has the damage and face of Part 6 but isn't based on the Part 6 design, a lot would say it's similar to Ghost Jason from Never Hike Alone, but to me, it looks like a more skeletal version of Part 3 (Head shape/appearance) fused with Part 6 (Face/Damage) giving us an Original Undead design.

I would give this Jason Voorhees design a 5 out of 5 stars simply because it's not based on the OG and gives us something new and original, the costume designer for this was amazing because it didn't make Jason with a Jacket look like a Homeless man like in Freddy vs Jason. (Yeah wasn't a fan of that design.)

The music was done by Adrian Emond which I can't say I wasn't that much of a fan but I am a rock/metal fan and he did an amazing job regardless of picking music that would have been fitting the concept of a Friday the 13th film.

But the overall theme song for it is just amazing and original! check it out here!

This is a 3 out of 5 stars and sadly this is only because I don't think the tone or lyrics for the music used is for let's say fitting or suited the theme and feel of Friday the 13th but I do love rock and metal theme music! so that is a plus from me!

4 out 5 stars! Cody Faulk did an AMAZING Job as the Director, Writer, Editor, and Colorist for the film! the film was something original, something new to the fan film community it took us back to camp crystal lake but with something new and a huge twist to and from the start of the film, this by far one of the more unique fan films in the history of the Friday the 13th community there were no "real" overused throwbacks to canon previous films with the expectation of Pamela Voorhees shrine, but how couldn't you have the mother of Jason in the film?

I hope he does a sequel or a separate continuity for his stories with Jason because having to witness this shows what fans of the series can and could do with a series!
The Official Youtube Link: