Voorhees: Night of the Beast

Voorhees: Night of the Beast

Voorhees: Night of the Beast seems to be a Jason Versus Sasquatch Fanfilm, while also including multiple original F13 film homages which includes The New Blood, Jason Takes Manhattan, and Jason Goes to Hell. 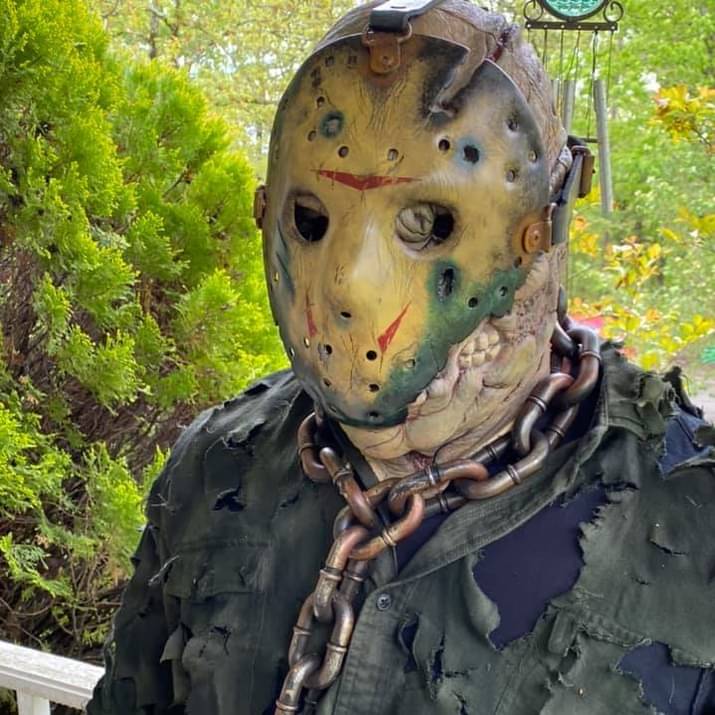 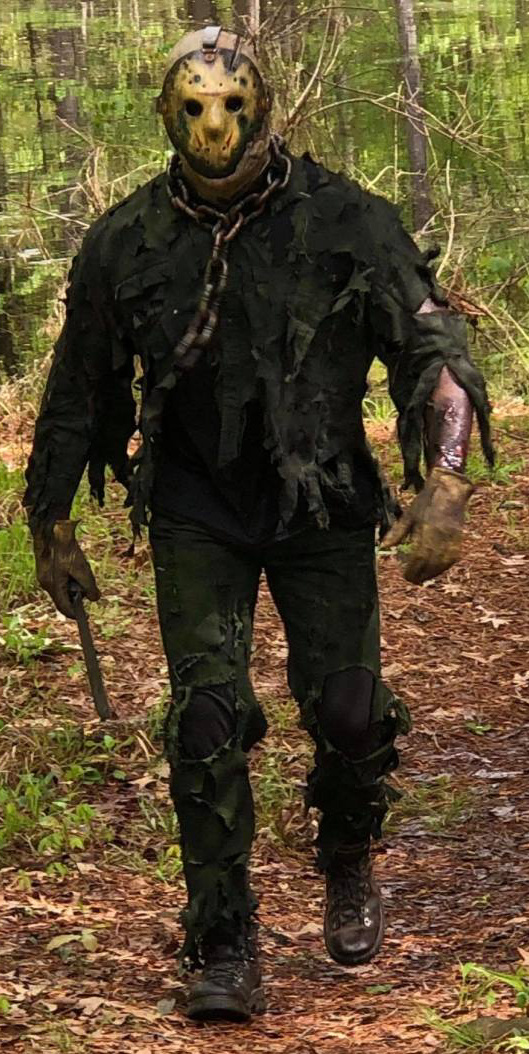 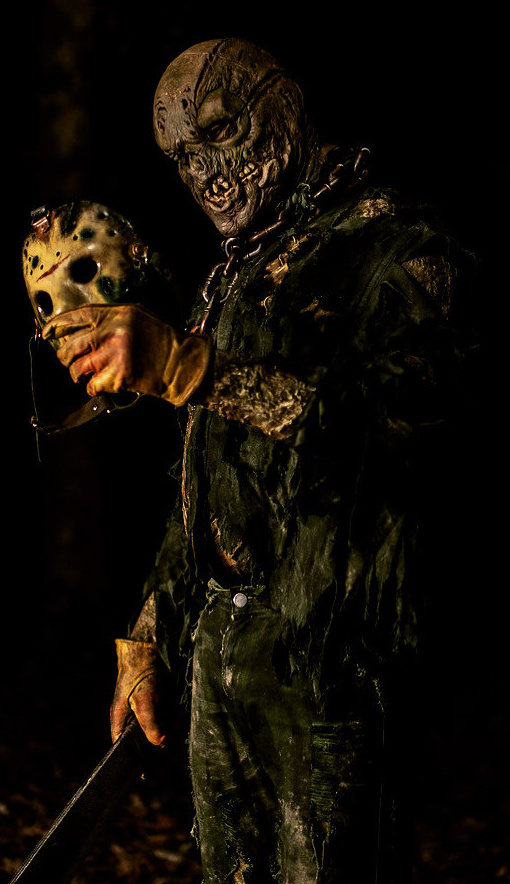 So it seems to be a Part 7/8 Match-Up? Im confused on the timeline as well.

Honestly dont know what to really say I had to do some snooping around, for more information about this Fanfilm and not alot turned up I dont know if this is a 30-Min film or a full length which is an hour and thirty minutes worth of screentime and shooting but the Costume for this Jason looks sorta weird its not a bad thing but they could have done alot more if they were doing a hybrid version appearence from two films.

As everyone knows, Im not a big fan of the Necromicon being used in Fanfilms but they also spoiled it being within their Film from their Facebook. 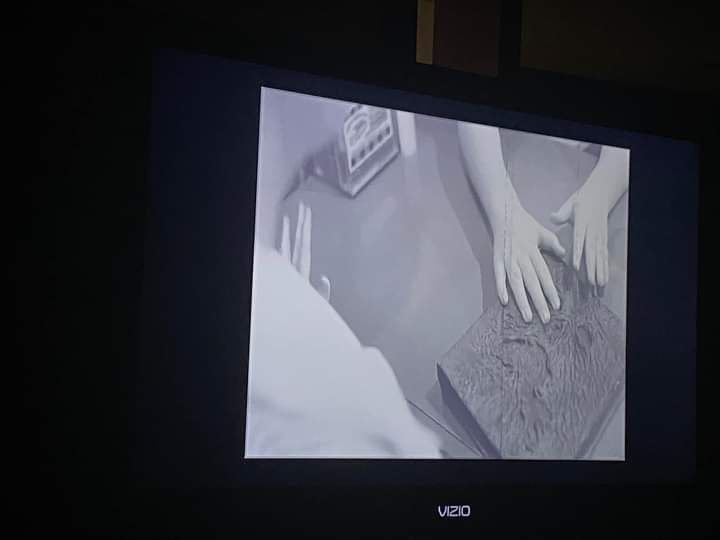 Again I never liked the concept of the Necronimcon being used to explain the mythos behind Jason.

Also I noticed they are doing their own version of Creighton Duke which isnt a bad thing but they state this... 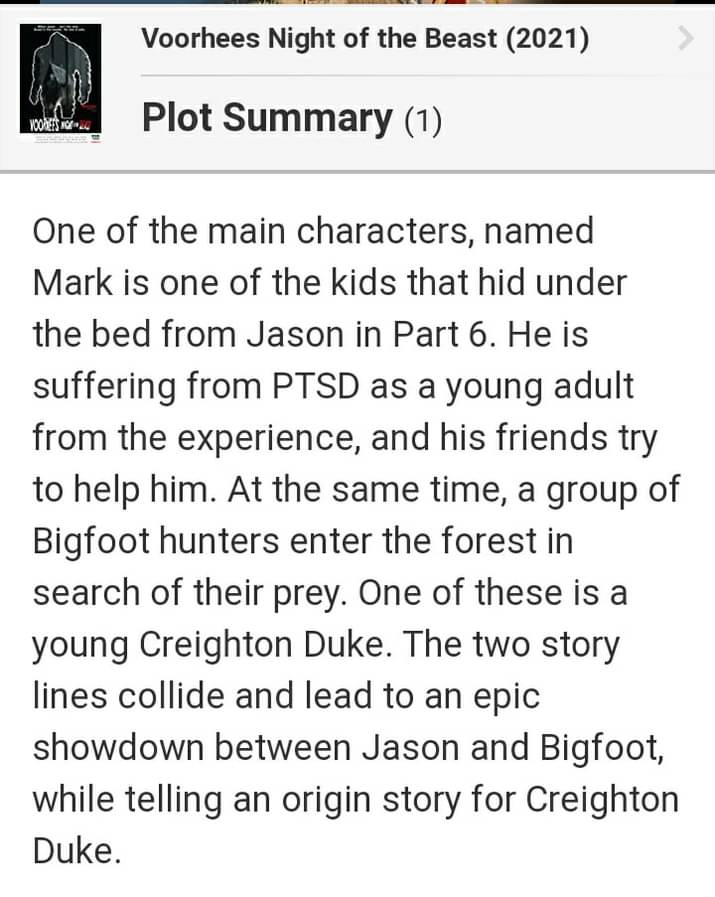 I dont know if this is all purely just fanfic and not following majority of the lore but Im pretty sure the backstory from Adam Marcus is that Jason killed Creighton's long time girlfriend likely after the Tina fight, which is why I dont understand why he is part of the Sasquatch Group.

Im always up to promote a Fanfilm.

This one is very very odd lol Bigfoot Vs Jason? This is the first Ive ever seen.

It's pretty weird and stupid, I mean Jason Vs a cryptid it's weird I'd rather see Jason fighting vampires and werewolves and zombies.

And the necromicon? Why are these Braindead fans thinking Jason is a deadite?

I really hope it wont be any explanation and just an Easter Egg. 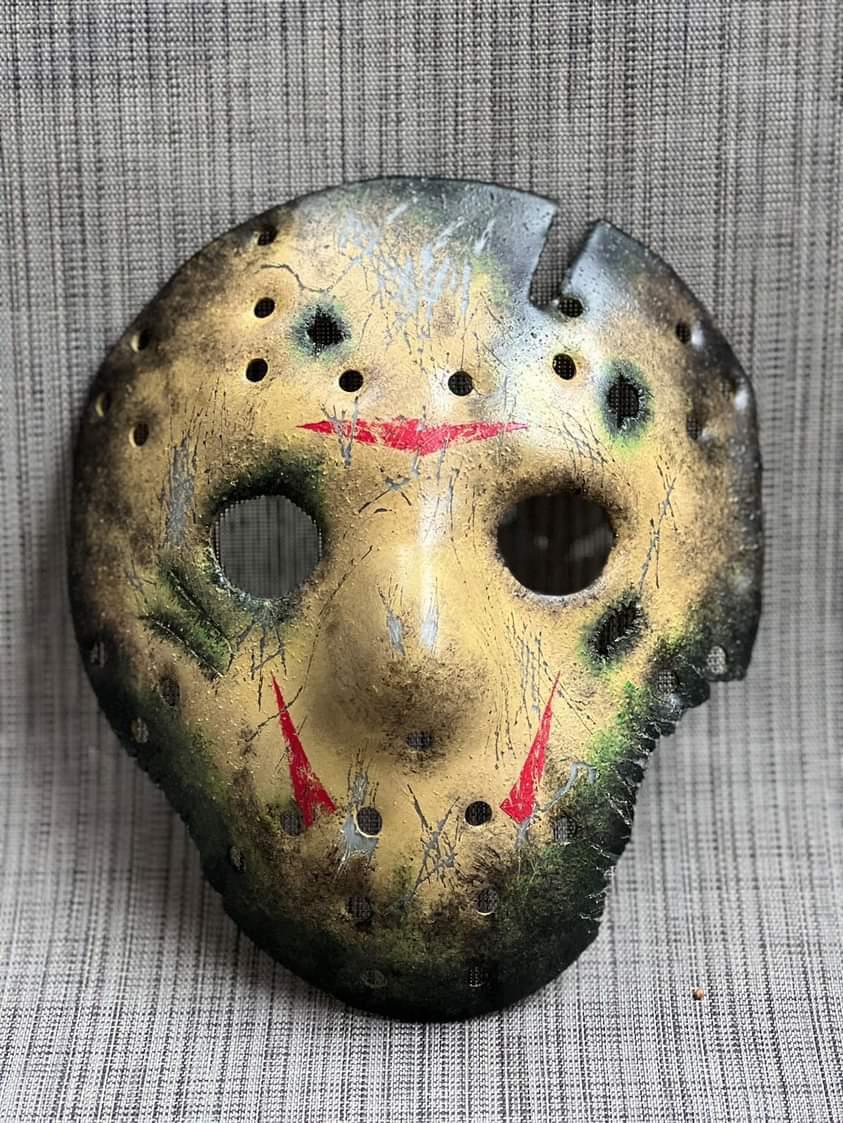 The Mask was created by EmperorPalpatony for this fanfilm and is established as a Part 8/9ish hybrid and its a 10/10 for me!

Fun Fact: I actually just bought this Mask because it looks absolutely amazing for my Part 8 Cosplay! Didnt know they were the same mask until he mentioned it! 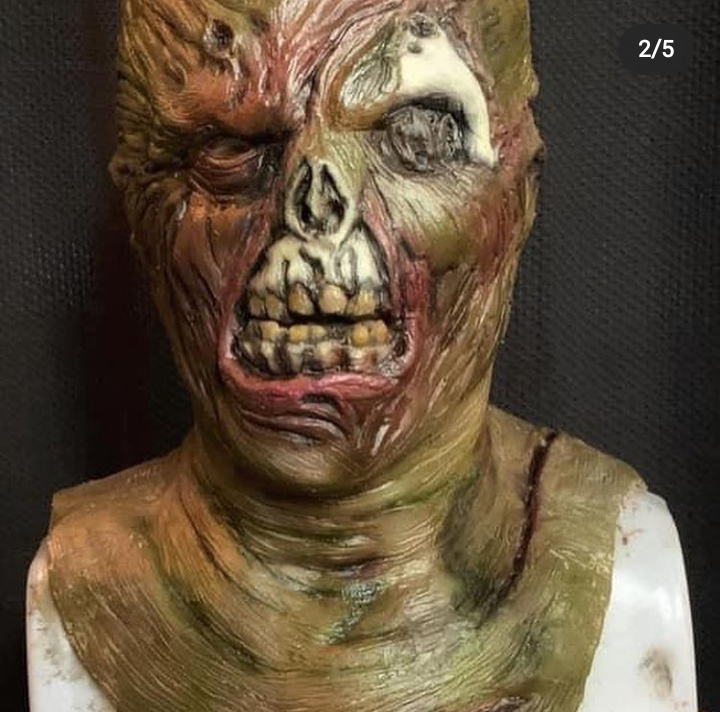 This is obviously an old Latex Mask they likely used for Teasers and such, it doesnt look good but its NOT the absolute worse we have seen around so this is a 5/10 for me. 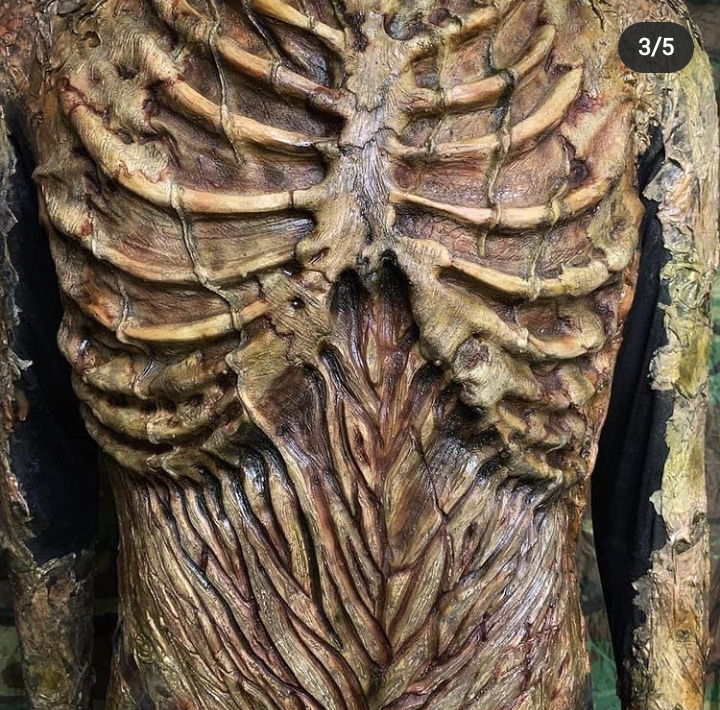 Another 10/10 for me is the Skin usage of this piece! It actually looks like a Dried up/algae used Part 7/8 underskin! 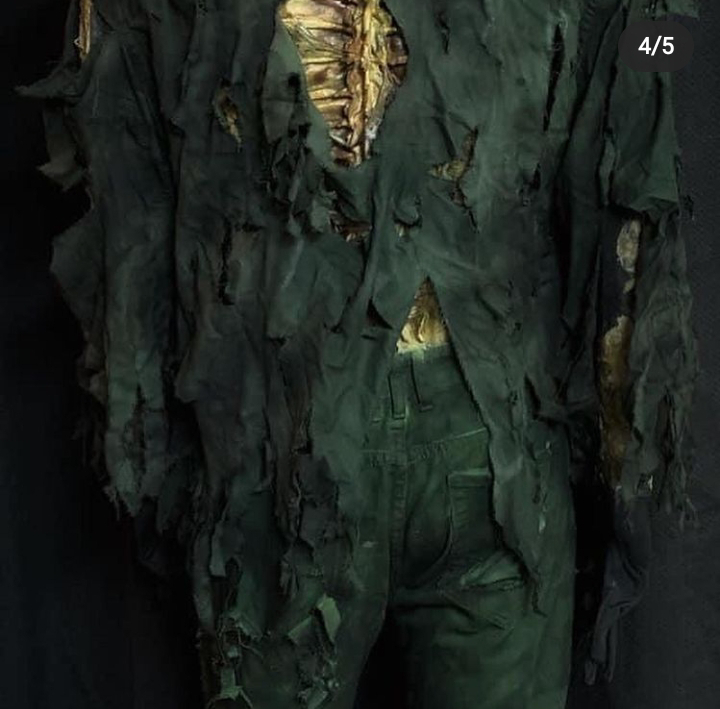 In my opinion the most disappointing...I would think it would look like a hybrid between Part 7-9 but its not too ripped up to the torso piece which is amazing to see, it doesnt have that Kane Hodder feel to it. 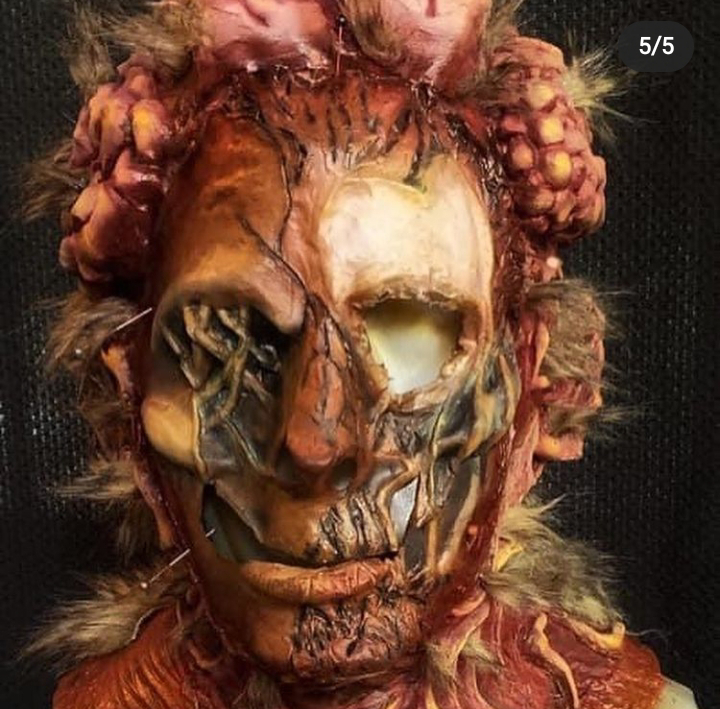 As introduced this fanfilm has a hint of Jason Goes to Hell (aka JGTH) and this does look bad but not to bad to be seen just masked up and if there is an unmask scene with this hood oh lord...Ill give it a solid 5/10

I always look forward to watching a fan film!!
Hope they pull off this mash up of Continuity in an entertaining way that’s all I care about.

OCT 31 1978 wrote:I always look forward to watching a fan film!!
Hope they pull off this mash up of Continuity in an entertaining way that’s all I care about.

Trust me I do too! I am just honest about what I feel! I hope the film does well because I haven't seen anything like this plotline with Part 8/9 with Jason ever fighting big foot! I hope the new updated costume and stuff is a final reflection! Definitely gonna make a review once it's released.

Hey guys!  Writer/director of Voorhees Night of the Beast here.  It is in fact, a Jason vs. Bigfoot movie, and it is now out on YouTube!  Here is the link!

JasonPitts wrote:Hey guys!  Writer/director of Voorhees Night of the Beast here.  It is in fact, a Jason vs. Bigfoot movie, and it is now out on YouTube!  Here is the link!

Thanks for signing up Mr.Pitts!

and thank you for telling us its been released!