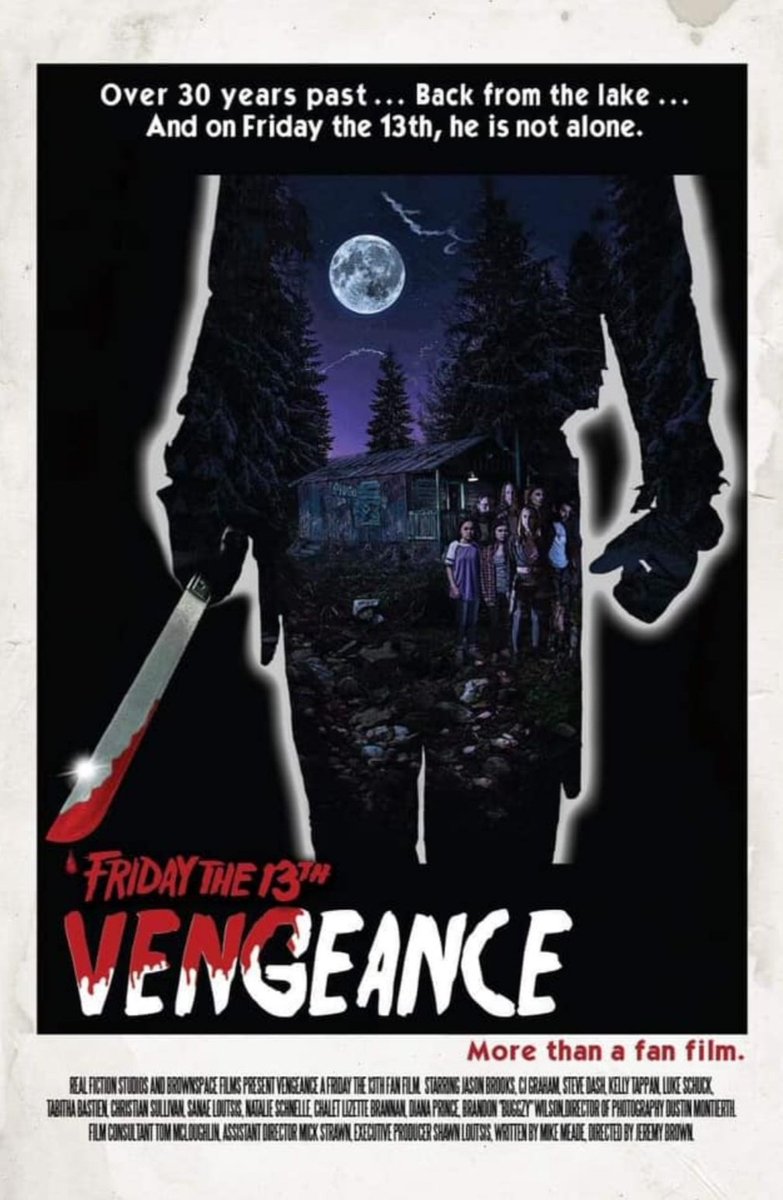 This review is NOT about pure hate, overall fanboying, or biased views but A PERSONAL and HONEST perception of the fan film Friday the 13th Vengeance! The rating system based on this review is based on a scale of 5 stars each point will be given an official rating, and to remind this is my opinion! I AM NOT NO ROTTEN TOMATOES CRITIC I AM A FAN OF THE SERIES!

The premise is that there is a 30 year difference from Friday the 13th Part 6 where it takes place in a more modern and current age of 2019, where Jason has been trapped and his father Elias Voorhees (C.J. Graham) is now in the area killing off random which now involves an off-screen Tommy Jarvis seeking out believing that it's Jason, but after a short disappearance the real threat to the campgrounds is Jason Voorhees who is now awakened and breaks free from his hibernation and begins a new slaughter on Camp crystal lake now renamed Camp Forest Green.

I rate this storyline a 4 because it's something new and it's creative and made by the fans, nothing of those awful fanfic stories by Tumblr or fanfic based websites, its original and something that could be explored for a sequel, but the one thing I did not like was the reference to the evil dead series as many known from my page I am not a fan of the Necronomicon being a source of Jason's resurrection, and that it was Elias who killed the two teenagers in the original was also a very deeming point to me.

I will not sit here and lie....the acting was sorta stiff, some actors like Steve Dash as Sheriff Jason Realotti was iconic to see, C.J. Graham as Elias Voorhees was another iconic moment and having to see both these characters interact with even the minor characters were a lovely sight to see as a fan of the franchise.

Kelly Tappa as Angelica Jarvis and Sanae Loutsis as Ashley Jarvis were one of the good actings that showed a lot more than the other minor characters it wasn't bad in the least to watch them on screen.

Brandon Wilson aka Brandon 'Buggzy' Wilson, as Aiden Adonis was a funny and fun trivia moment as his character, is from the game and seeing him perform on film was another iconic moment.

Julia Valenti as Deputy Alice Brooker and Ray Hopper as Deputy Lewis Tucker showed legitimate chemistry which gives the boost that characters need in a film.

Peter Anthony displaying his own acting performance was fun to watch as this guy is huge in the horror community and shows his love for the franchise when facing Jason Brooks as Jason which is one of the many highlights of the film.

But for the minor roles, the characters didn't do much development-wise other than to be killed off, and some of the actors could have put in a little more "performance" into such a huge project.

The major actors put there best efforts and that shows! the horror icons and the now new icons in the horror community are now known! the minor characters could have put a lot more effort than they could have to the film!

I will admit here that the special effects could have had better authenticity such as the beginning kill with the rock, the two getting killed in the tent, and the slashing of the prisoners (still a fun scene for me to see even if it's offscreen.)

I will say on record that the scene where the "red neck" type character gets his spine ripped out was pretty nice to witness!

And the blood/gore effects weren't that bad to witness on screen but it seemed it had to be that way likely to avoid the issue with the Youtube guidelines of blood and gore and having to put a mature rating for viewers which is similar to how the MPAA butchered the future films of the franchise such as Friday the 13th the New Blood and Jason takes Manhattan.

The rating is 2/5 stars because to me and let's have me say this again....in my opinion, it could have been a lot better than it was! this is again a fan-film after all!

Jason Brooks himself created his own Jason a mixture of C.J. Graham's Part 6 Jason fused with Derek Mears 2009 Jason, and a hint of Kane Hodder breathing which makes us get a version of Jason that is unique to that specific Jason, such as how quick-paced the kills were was on his terms and they weren't bad shots either, such as the walking movement which gave him a more "intense" aspect to the role of his character.

The design process of how Jason Voorhees would have looked as after 30 years in the lake is something many people couldn't pull off and they did with the help of the creative crew such as the creation of the hockey mask design concept which was by Asher Brooks and the execution and refined final design was by Brian Hargrave stated by Jason Brooks himself, shows what 30 years could do to a hockey mask, the most iconic part of the mask was that it was inspired by the end of the film of part 6.

The rating is a 5! the new take on Jason was unique and different and the design was inspired by the film it takes place from which is dedication!

Harry Manfredini had yet again outdone himself for his musical passion! so did Asta Wylie's own tribute/music video for the film was a nice touch to the fill of the franchise!

No surprise that it's a 5/5 star! the melody, the lyrics, and much more to the mood and setting gave it a plus for me!

If you want a fan-film that gives you the lust for a Friday the 13th film during the current legal battles and that it holds a legacy to the one it's based from and after then Friday the 13th Vengeance is your fan film.

Some really almost good actors, some good kills, the amazing music, and a talented Jason actor is what makes this film unique and different from the others which is what it should be as a fan film, it's not some mediocre quality film, set on a budget that most fan films don't really have given me the hope that future films will be like Vengeance in taking the time and dedication to show that fans truly love the franchise and to not make just a quick cash grab for themselves!

Make sure you watch Vengeance and let yourself decide!