What is Jason Voorhees Dominant Hand?

What is Jason Voorhees Dominant Hand?

What is a dominant hand?

The dominant hand is the hand that the person is more likely to use when doing fine activities like writing, brushing your teeth, or catching a ball. When someone says they are for example Left-Handed, they're saying that their left hand is dominant.

Reboot Jason played by Derek Mears is NOT listed here because this is solely for and about the ORIGINAL Timeline of the franchise, and Roy is obviously NOT nor will he ever be Jason. 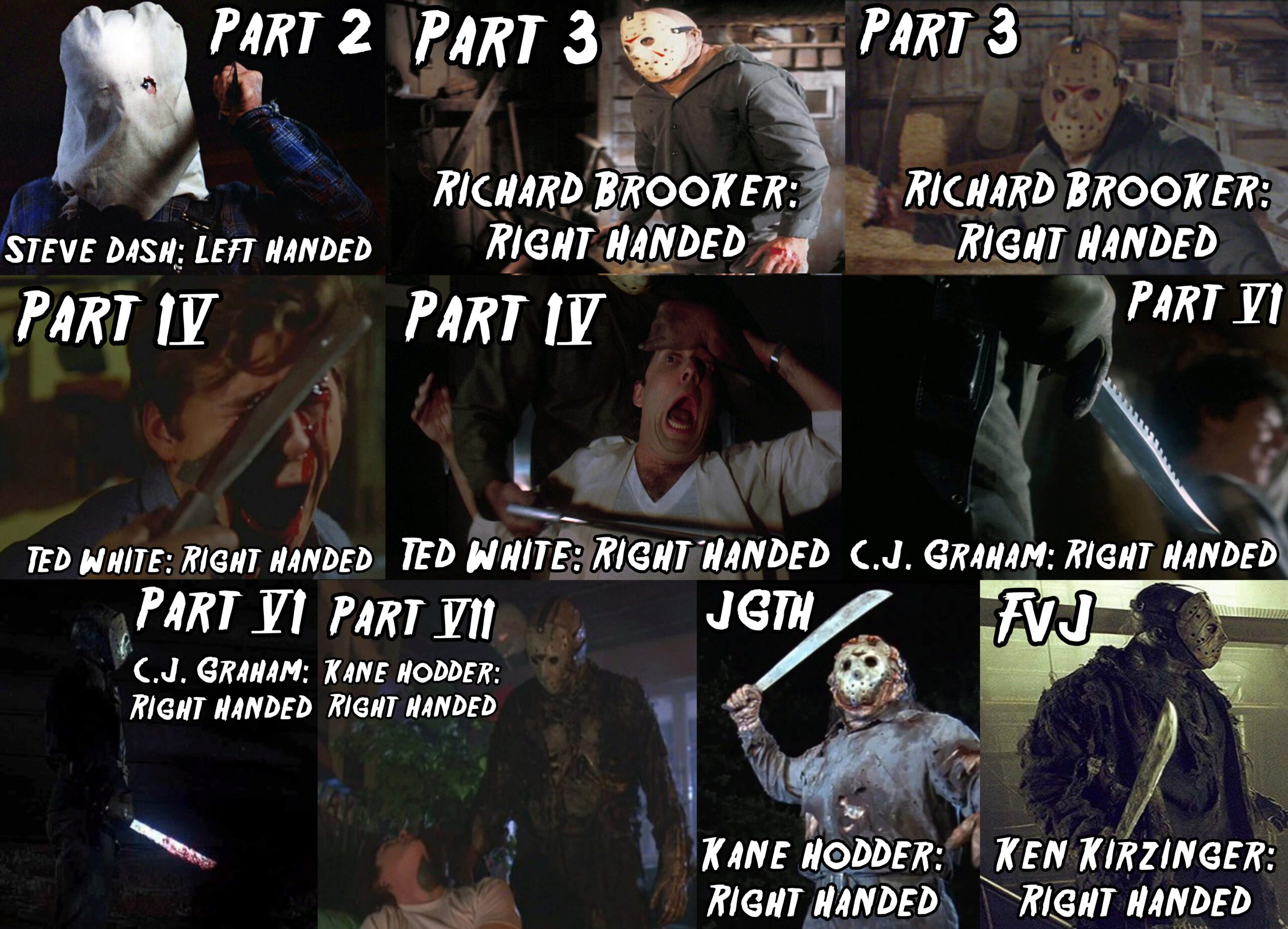 Disclaimer: Nothing pasted together has been flipped all of these are from and by the films themselves! There is NO MANIPULATION!

When I was at Mad Monster Party (2022) its where Kane Hodder himself was a Celebrity Guest to Meet and this is how if played out word for word...

Kane Hodder: wrote:Wait, are you holding the Machete in your Left hand? Are you left handed?

Kane Hodder: wrote:Well, you are holding it in the wrong hand, its suppose to be in the Right hand.

My Defense: I have a Dominate Left Hand, and I be forgetting that Jason is dominantely a right handed character,  so yes, more confirmation that you hold single-handed weapons with your Right hand as a Jason Cosplayer and so this is also due to me taking pictures with individuals in different positions and I forget to switch it back.

And before anyone claims "KaNe wAs bEiNg A prIcK." No, No he wasn't as a Unofficial Protege, I take anything he says about the character seriously, I love the character and the franchise, and I want to properly play the part be it for Cosplaying or for my Future Fan-Films, his "Opinions" also does matter as again he did play the Character 4 Times, and kept it completely linear, and gave character development without voice lines, same with previous actors and after who have had dominant right handed moments.

Kane Hodder has always been a great influence, help, and mentor for me as a Cosplayer and future Jason Actor.(Unofficially ofcourse and hopefully one day Officially)

Jason Voorhees is a Right Handed Killer! This is due to Multiple confirmations within the franchise.

To be completely honest I think Jason is ambidextrous and has got enough talent to give both hands equal amounts of killing time….lol both Hands are equally dangerous

OCT 31 1978 wrote:To be completely honest I think Jason is ambidextrous and has got enough talent to giving both hands equal amounts of killing time….lol both Hands are equally dangerous

Ah I believe you are speaking of the term Cross-Dominance which a person is 50%/50%.

From my understanding of Cross-Dominance, it is a favoring type of body movement.

Could Jason be ambidextrous? Sure he could be but by the films we see that Steve Dash is the only Left Handed Jason actor for one scene that I noticed but with JGTH: TFF doesn't count due to multiple body-switching flaws.