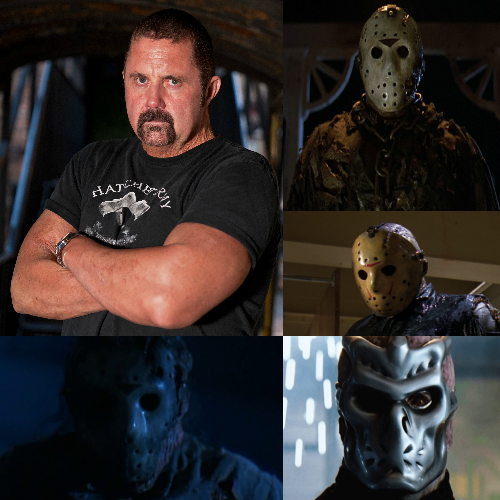 Kane Hodder is the man who played Jason Voorhees and wore the infamous hockey mask and made cinematic history for his role in four of the consecutive films from Friday the 13th Part VII: The New Blood, Friday the 13th Part VIII: Jason Takes Manhattan, Jason Goes to Hell: The Final Friday, and Jason X while also originally suppose to have been the one to play Jason in Freddy vs Jason.

Kane Hodder had his debut role as Jason Voorhees in Friday the 13th VII: The New Blood, which he was given this role by his friend John Carl Buechler who went to paramount to have Hodder as his ideal Jason which worked and Paramount had found their Jason, and which helped Hodder be a more household name to the Character.

Without his debut as Jason, we wouldn't have had such a consistent development with the character from the walking and from the body movement of the character and Kane kept it very forward of how he wanted to portray his Jason on film.

Out of all the previous actors before Kane himself, they all played the role only once and only two had ever expressed their what if chances of reprising the role if they knew it would have been this big of a franchise and that would be C.J Graham (Part 6 Jason) and Steve Dash (Part 2 Jason).

Richard Brooker (Part 3 Jason) has no real statements that I have found on if he ever wanted to reprise the role but however Ted White (Part 4 Jason) had gone on to state that he took it just like a usual Job that's it just pure acting for a role for money.

If your best argument is to use box office sales to discredit the role Kane Hodder had made his own then you are in a far losing argument....and how so? after Friday the 13th Part 4 the franchise stopped hitting the average $31 million dollar mark at the box office.....so even you claimed Part 6>Part 7 because of Box office then that's a poor man argument due to the facts that there is a $302,056 difference between their total box office.

so let's get this straight so any film's box office=/=actors performance.

A bad movie plot or bad story-wise is not the fault of the actor whatsoever they are just playing a role.

I have seen people try to discredit Kane's performance by calling him overrated....and People who use the word "Overrated" are the ones who clearly don't know the definition so the definition of Overrated is "having a higher opinion of (someone or something) than is deserved."

The argument of "Omg Kane Hodder is so overrated." because he played the role more than once is illogical to what the actual "overrated" definition is....due to the fact that it's like saying Haruo Nakajima is overrated for Playing Godzilla 12 times through 12 movies.....or like saying Robert Englund is Overrated for playing Freddy Krueger more than once, or even saying Keanu Reeves sucks as John Wick because he played the role Three times.

So if you are saying/claiming in an argument that because Kane Hodder played Jason Voorhees 4 times makes him overrated then by your own default logic any and all actors you like that keeps reprising a role is by default overrated meaning you calling your own favorite actor/actress a one-trick pony.

Plus during that time Friday the 13th Part 7: The New Blood was given bad criticism but still almost gave the same box office as Part 6: Jason lives so how is the film or the actor who played Jason overrated? it's illogical and ignorant to say it.

A bad movie doesn't mean an actor's performance is the reason for it...People had said, "Oh Jason isn't supposed to be this or that! he should be invulnerable to this or that." This is just what WE expect as fans vs what the director and writer wanted but in instances, Kane Hodder made his own persona his own version of Jason.

Part 7 had introduced a far more zombified Jason which had fans in awe with an actual plot to follow and gave way to Kane's 1st Jason role.

Part 8-Part X was just to help make money for the company which Kane was just loving the fact he can reprise the character.

Just because someone didn't make something you didn't prefer doesn't discredit the performance in which Kane had done the best Job in the franchise.

After reading posts after posts.....People don't have a legitimate or reasonable argument or a debate to state how or why Kane Hodder wasn't the best Jason in the franchise...yes he wasn't the first, second, and or third, person to play the role but for god sake, he was the only actor who was so willing to reprise the role multiple times.

In interviews, you don't hear Kane Hodder saying "Oh yeah I just did it for the money." instead we see a guy with an authentic love for both the series and the fans that is what makes an actor when they love the role that debuts their career big or small.

If previous actors like Steve Dash and Ted White themselves give praise and give positive feedback for Kane why can't we fans do the same? so many say Steve Dash/Ted White/C.J. Graham had their levels but yet each Actor had their own traits for Jason and what about Kane's portrayal? He was just as aggressive or more and yes, he was very intimidating under full makeup...and he also did his own stunts like many of the previous actors (Some who did no stunts) but Kane did more physical stunts such as going through some stairs, jumping through a window with a full costume, and getting real punches to his gut just to sell the performance is more of an indication that Kane is like what Ted/Steve said...the Ultimate/Definitive Jason.

Now before everyone tries to attack me and say I'm just a Kane fanboy...I give praise and I give feedback to all the actors....only Jason actor I felt that didn't deserve the role was Ken Krizinger (No offense to him of course I love his performance in the Wrong Turn franchise) but that role should have been Kane's he set it up and it was stripped from him and he displayed hurt from that.

This is not to say "Opinions" don't matter this is to shut down the useless hate for such an iconic actor in the horror community! But hating on someone for an unreasonable and illogical reason to discredit their role/work as a character is not an Opinion or criticism just some unwanted and unneeded hatred! I understand the "I am entitled to say what I want." that's fine but if it's something of stupid reasoning people will have the right to dispute that! so if you aren't gonna debate and give valid reasoning for why you don't like this actor or that Jason then just don't state it!